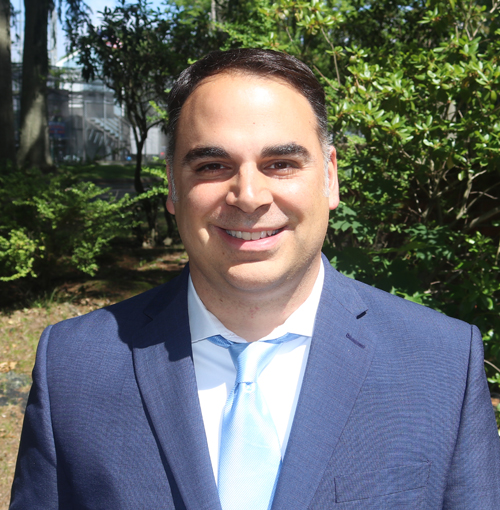 Mr. Genova began his career as an English teacher at Lyman Hall High School - a role in which he continued to serve for 12 years.

In 2016, he took on the role of department head at Lyman Hall before moving into the role of English Instructional Leader, taking the lead in the development of the English department at both Lyman Hall and Sheehan High Schools (Wallingford).

During his time in Wallingford, Mr. Genova was a member of and/or led multiple committees within the district. He was deeply involved in work focused on the development of Positive Behavioral Intervention Systems (PBIS), the English/language arts management team, and served on the NEASC Curriculum team.

As an Instructional Leader for the past six years, Genova focused on improving systems within the district that ultimately provided a better educational experience for students.  His work involved professional development planning and programming, and evaluation of district programming to ensure alignment with department, school, and district goals.

He was involved with the implementation of the credit recovery program, including the development of personalized learning for at-risk students. Mr. Genova also facilitated parent evenings and events, conflict resolution meetings and helped to create a nurturing environment for staff, students and families alike.

In addition to his work in Wallingford, Genova also served as an adjunct professor at Quinnipiac University from 2014 to 2020.  In this capacity, he taught graduate students on the subjects of teacher leadership and leadership philosophy, curriculum, instruction, and assessment.

Mr. Genova believes middle school is a critical juncture in students’ lives, as it is where interests, skills, and self-regulation take shape to last throughout their life-long opportunities. The impact educators can make on students at this age is what motivates him each day to be the best he can be.

Mr. Genova was delighted with his new appointment. "I'm looking forward to this next part of my career -- and equally happy to come back to my roots in Milford.”

Dr. Anna Cutaia, superintendent, added “I’m excited about Mr. Genova’s appointment as he brings a genuine passion for program improvements for the benefit of all children.  His caring disposition coupled with his expertise in curriculum and instruction is exactly what we are looking for in our instructional leaders, and in particular, for the next Assistant Principal at East Shore Middle School.”