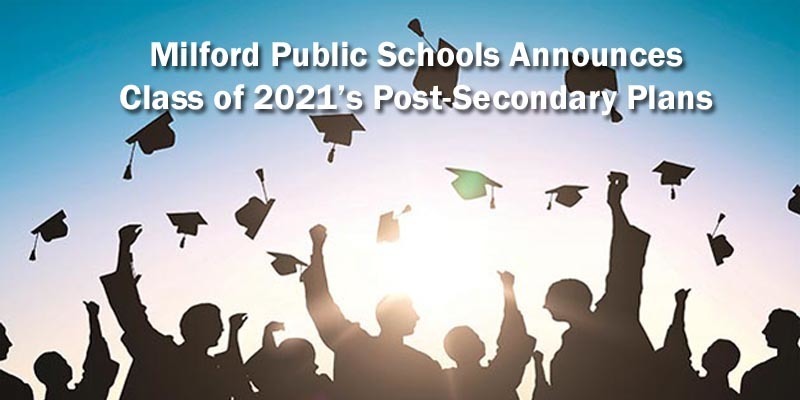 Post-Secondary Plans for Class of 2021

MILFORD – While it was certainly an unusual way to spend their final 18 months in the Milford Public School district, members of the Class of 2021 were ready to ‘represent’ as they began their post-secondary experiences last month. Approximately 87% of this year’s Milford graduates entered a wide variety of 4-year, 2-year, career training, or military programs this fall, with many enrolling in some of the most rigorous programs across the country.

A total of 1,469 acceptance letters were issued to MPS students, representing 311 colleges, universities, and other post-secondary programs. This fall, 352 students from the Class of 2021 began their courses of study. Although the COVID-19 pandemic environment still places additional considerations on students choosing to live on school campuses, Milford students began their post-secondary academic pursuits close to home, across the country, and abroad.

Milford Represented Well at Top Tier Colleges
As one of the many measures traditionally used by the district, administrators monitor the number of acceptances and enrollments at post-secondary institutions that are defined as “Most Difficult” and “Very Difficult” to enter (Peterson’s Guide to Colleges and Universities). This year, 117 Milford grads were accepted to institutions with the most challenging of entrance requirements, with 48 ultimately enrolling. Members of the Class of 2021 started their college experiences this fall at Brown University, Dartmouth College, Massachusetts Institute of Technology (MIT), Trinity College, Tufts University, and Yale University.

Some additional institutions labeled as ‘very difficult’ to enter that welcomed Milford students this fall were Boston University, College of the Holy Cross, New York University, Northeastern University, Rensselaer Polytechnic Institute, and Vassar, among others.

Equally impressive was the appointment of one Milford student to the U.S. Naval Academy in Annapolis, Maryland.

Dr. Anna Cutaia, Superintendent of Schools, was not surprised at the depth and breadth of acceptances and enrollment choices of Milford students. “Each year, we analyze the post-secondary outcomes and choices of our students and I am proud to say they have proven, once again, that they are ready and well-prepared to continue their educational dreams through our intentional approach of making both academic and experiential learning available - both in and outside of the classroom. With nearly 1,500 acceptance letters issued to Milford Public Schools students, I offer that as proof that the Milford Public School district is preparing young minds for the future.”

Cutaia continued, “We are proud of the excellent opportunities that have been afforded to our students, as reflected in the choices they have made for enrollment, but are even more pleased with the volume and quality of acceptances received by them. While a student’s final choice on selecting where they will attend college is often a family’s personal decision, (with regard to personal preferences, cost, financial aid, distance, and other factors), I look at the letters of acceptance as an even more important feature, supporting the exceptional education Milford students receive. They are prepared and can compete with the best and the brightest – anywhere.”